As well as punters and professional gamblers using our ratings, we suggest that Trainers and Owners should also be using our ratings. We are in the position to be able to provide 5 day declarations to owners and trainers in ratings format.

This means Trainers and Owners can find out where their horses are rated and if they are multiple entered they can assess to find the race that is the weakest or suits them the most.

Today we have had a look at the Cheltenham card on Friday and Saturday and also the Aintree card for Sunday.

We shall start off with one of our National Hunt Horses to follow in Shantou Village who is entered in 2 races. He is entered on the Friday over 3m and over 2m3f on Saturday.

As we can see Shantou Village would statistically have more of a chance in the 3m race rather than the 2m3f. Whilst Neil Mulholland is probably wanting to slowly bring this one along, running over 2m3f may cause him to be in a much more competitive race than ideal at this stage as even if 1 or 2 of the horses rated higher came out of the race he would still be looking at being only 5th rated.

If 1 or 2 of those rated higher in the 3m race came out he could end up being TOP RATED and thus having just as easy race as running over the shorter distance as the opposition are less likely to make him have to work.

If he ended up running over 2m3f and finished down in 3rd or 4th then this could affect the horses confidence or at the very least the future jockeys confidence that the horse will be able to pick up when required and this doubt in a jockeys mind could be the difference between winning and losing.

Another trainer with a decision to make this weekend is Phillip Hobbs who has No Comment entered at both Cheltenham and Aintree.

No Comment has come out rated 5th at Cheltenham and there looks to be at least 1 (Top Rated) who would be very hard to beat if this one was declared for the race and instead it is probably worthwhile running at Aintree.

Not only is No Comment Top Rated at Aintree but he also scores a higher RTR score. This means the race is BOTH less competitive AND the race conditions suit more.
No Comment unseated last time out at the 2nd hurdle at Chepstow and I would be trying to rebuild any confidence this horse may lost through that. Taking on potentially 4 better rivals could see this one pushed harder and if there are any jumping issues then they are likely to be tested again. If No Comment went to Aintree however he would be the one to beat and isn’t as likely to have his jumping tested.

Kayf Tara progeny have 22.58% strike rate over hurdles at Aintree compared to a much lower 8.86% over hurdles at Cheltenham and this is surely enough evidence to show that Aintree would be the much better option.

Kim Bailey is another trainer with a horse who has 2 entries and that is Patsys Castle who is entered in both a Pertemps qualifier at Cheltenham and also a Conditionals Jockey Handicap hurdle at Aintree. 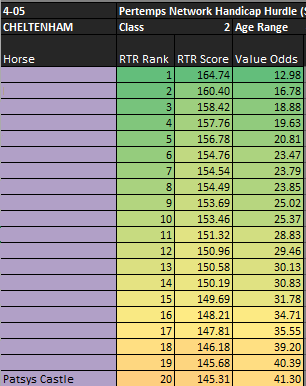 Patsys Castle is Rated 20th at Cheltenham compared to being Top Rated if he were to run at Aintree and this looks like a clear decision on this one.

Patsys Castle won his last race at Warwick when comfortably pulling clear of his rivals however they were rated between 105 and 120. Should he run at Cheltenham he could be running against horses as high as 154 and if this was the case he would be running from out of the handicap.

Whilst there may be some horses in the Pertemps Qualifier who are not there to win but qualify by finishing in the Top 6. Patsys Castle is only rated 115 currently and would need to be around 135 to get into the final.

If he ran at Cheltenham he is unlikely to challenge those at the head of the ratings and would struggle to even get a Top 6 and qualifying position and would likely affect the confidence of the horse for his future races.

If he were to run at Aintree, he would be the one to beat and would have a much greater chance of winning as he would definitely be in the handicap as the highest rated horse is just 125. Whilst a Top 6 finish would be difficult at Cheltenham, he would be aiming to win at Aintree. If he could win again and then potentially run in a subsequent Qualifier he is likely to be in the handicap and have a much better chance of achieving that Top 6 finish.

There are any number of horses this weekend who have multiple entries and Trainers and Owners should be using our ratings to find out which races their horses have a better chance of winning/running well in.