Skip to content
RatingTheRaces Interview with Our Form Expert Liam!

RatingTheRaces: Royal Ascot has been good so far (going into day 3) with some big winners found. Can you tell us what made you pick The Grand Visir and Afaak?

Liam: Royal Ascot is going well, guaranteed a profit of 31 points is great and hopefully we can add to that today.

The Grand Visir, I’ve been a fan of for a little while now, ever since he won a handicap at Haydock over 2m. He finished really well that day under James Doyle for William Haggas and demonstrated to me that he was maybe even a pattern class horse.

After a few months off the track after disappointing at Newcastle he returned for Mr Butler and won at 25/1 over 1m6f at Doncaster again finishing really well before he was sold again.

His new trainer Ian tried him over hurdles to start before dropping him back to the flat where he finished 7th when really catching the eye. If you get time, go back and watch that race, not only will it throw up plenty of winners but you can see why I added The Grand Visir to my RTR NagMe that day.

I always felt a long distance race would suit and was delighted to see Ian run him and it was all about whether there was something better handicapped. He was given a great ride at Ascot and similar long distance races are surely on the agenda now including the Cesarewitch and maybe even a Melbourne Cup if he’s high enough rated.

Afaak was more of a gamble but one worth taking I felt. He had previously finished 2nd in this race last year and had then been going up and down in distance, in my opinion to continue his progression but also to hide his best form until returning this year. On both his previous efforts over 1m before his Ascot 2nd last year the winner of the race had been another Hamdan Al Maktoum horse which also pushed me to believing there was more to come from Afaak. 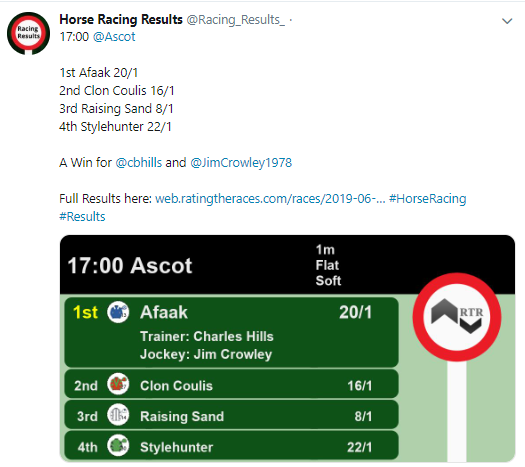 RatingTheRaces: 3 Days left of Royal Ascot, who do you think is the best bet of the remaining 3 days?

Liam: This is a tough one as I’m sure I’ll suggest one horse and it will disappoint whilst another in the race I’ve selected goes and wins it. Let’s go for Fujaira Prince @ 7/1. It’s not very original but I really like the horse. Last time out he finished 2nd to First Eleven who actually finished 3rd in this race last year. First Eleven was also TOP RATED the day he beat Fujaira Prince and I always give the form a + for this and feel it should work out well. It has already to a degree with Red Galileo who was only 8th winning since whilst Byron Flyer who was only 13th that day has since finished 2nd at Epsom.

I felt the front pair were both still improving and could both be Group horses later this season. A 4lb rise isn’t harsh at all. I would be disappointed if he wasn’t close at the finish.

RatingTheRaces: After 2 day’s of racing so far at Royal Ascot, can you give us a horse to add to our RTR NagMe’s?

Liam: Yes absolutely and I’ll even suggest which race he could now be aimed at. Summer Sands for Richard Fahey. He ran a great race yesterday for 6th when arguably poorly drawn in 9. Those in front were drawn 24, 22, 23, 11 and 19 with the well backed Symbolize being the horse from stall 11 to finish 4th.  Summer Sands ran on really strongly for 6th and I feel had he been drawn high he would have gone very close. His previous 3rd to the highly regarded Bomb Proof and then winning the 2 Year Old Trophy at Beverley shows he has a lot of talent. Yesterday’s race was obviously a Royal Ascot race however prize money for winning was only £51,000. The Redcar 2 Year Old Trophy in October is worth just shy of £100,000 for the winner and Richard Fahey and the Cool Silk Partnership teamed up last year with Kodyanna who ran a cracker for 3rd and I’m sure this could be their representative this year.

RatingTheRaces: Away from Ascot, is there anything that catches your eye over the next few days?

Liam: I love National Hunt racing just as much as flat racing and there is a very competitive Summer Plate Trial at Market Rasen tomorrow. What we have to be careful about here is working out who needs to win to get into the main event itself. You want to be rated 130+ to 100% guarantee a run. Bandsman therefore catches the eye for the Skelton’s. Off just 125 they will want the horse to run a good race and I think will be going for the win. If you can get anything above 4/1 then he probably is a good bet especially e/w as they won’t be wanting to finish much further back than 3rd if at all. Looking ahead to the main race next month, Wait For Me and Royal Village really catch my eye from those who were entered in this Trial but didn’t need to run as their marks are high enough.

On Sunday we could see Suegioo make a quick return after his eyecatching run at Chester last week where he finished his race off really well over 1m4f. He was dropped 1lb and would be running off a 2lb lower mark than when winning the race. It looks like Ryan Moore has been booked to ride at the moment and they would surely take all the beating here. 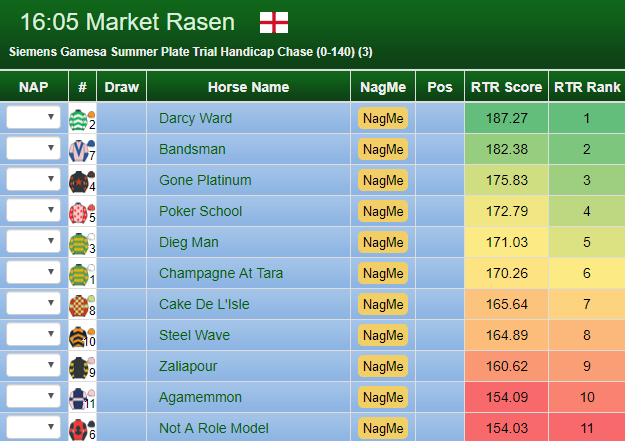 RatingTheRaces: Finally can you give us 2 bits of information regarding the RatingTheRaces service that you feel is overlooked or underused?

Liam: One, I’ve mentioned already regarding First Eleven and Fujaira Bridge. When Top Rated wins a race, the form tends to be stronger than when Top Rated does not win the race. So I am keen to back horses who chased home Top Rated particularly if they were well fancied to give Top Rated a run for their money. Fujaira Bridge fits this perfectly.

The second is the RTR NagMe. I couldn’t live without it. My memory is pretty good but I can’t remember every horse that was eyecatching or what they need going forward, be it a step up in distance, faster pace, clear run etc. Adding horses to my RTR NagMe means I receive an email the day before racing alerting me that NagMe horses are running. I can then load the Ratings, load up the NagMe and see what my reasons were and whether they should now be backed. The Grand Visir, Miracle Garden, Wise Counsel, Mr Adjudicator are a few that have won recently that were added to my NagMe. I tend to also give them a few extra runs even after they’ve won as they can still be progressing as I had hoped. The NagMe tool is FREE for everyone and can be accessed under tools on any page!

RatingTheRaces: Remember the Ratings are FREE to try EVERY Friday and that includes tomorrow for Day 4 of Royal Ascot!

Get unlocking them NOW as they are already available!