Skip to content
Ante-Post Handicaps – Can I Land Another Touch?

Who do I (Liam) fancy in the Bet365 Trophy at Newmarket

The obvious starting point is Fujaira Prince who made my Royal Ascot Eyecatchers AND I suggested this race as his next likely target before a run in the Ebor later this season. Currently number 27 for this race, I would be surprised if he didn’t get in. He does also hold an entry for the 1m2f Diamond Jubilee Handicap at York the following day but that race wouldn’t really make any sense. He looks like he stays further than 1m4f based on his effort in the Duke of Edinburgh so to see him drop in distance would be a real surprise.

Who’s dropped in the handicap and could play a part now?

The 2nd horse that catches my eye was down to run this weekend however he has not been declared and I think this is because they feel the handicap will be the better option. The horse in question is Raheen House for William Haggas. A Listed and Group 3 winner in the past with his Group 3 win coming at Newmarket over 1m5f when staying on well to win , Raheen House has slipped from a high of 114 down to 106 for this race. It’s also eyecatching that this is William Haggas ONLY horse in the race at this stage so I would be surprised if he didn’t run in a couple of weeks time.

He was last seen finishing 2nd at York over 1m5f behind Gold Mount of Ian Williams. That horse had previously finished 2nd in Group 1 races so finishing 2nd here was no disgrace and that was Raheen House’s first run of the season.

Fujaira Prince is 12/1 whilst Raheen House is 16/1. I would be disappointed if both of these were not involved in the finish as both look to have great profiles for this race.

Therefore we feel it’s worth looking at those who were in behind.

Shady McCoy for Ian Williams was back in 2nd off a mark of 97, he’s now rated 92 however this was an early closing race meaning he would be running off 95.

Just looking at this from a handicap mark point of view.

Taking into account there was just 1 1/4 lengths from 1st to 5th, this looks to give Shady McCoy and Makzeem great chances! 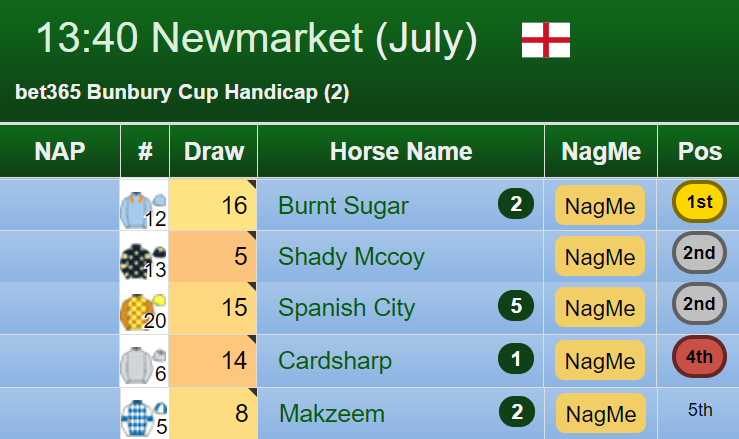 But they both haven’t been in great form recently?

We are not too worried about that. Shady McCoy came into the race with form figures of 006 whilst Makzeem had finished 67 albeit in Listed contests.

Makzeem was disappointing on his last 2 starts however his form at Newmarket reads 21215 suggesting he saves his best for this track.

Who could be the Star in this race?

I like a couple in this race but going to start with Star of Bengal who was last seen finishing 8th in a Listed race at Royal Ascot. Although this was a Listed race, the first 4 had ALL competed and even won Group 1 races. It was therefore quite a strong Listed race however it was the way the race unfolded that made me interested in Star of Bengal.

Star of Bengal was sent forward and tried to make all the running. This was just his 5th run and he was still in front at the 2 furlong pole. He had used up too much of his petrol in trying to get his more experienced and talented rivals beat and ultimately faded from here on in to finish 8th. The front 4 were all very talented whilst the other 3 to beat Star of Bengal had been given very patient rides and had arguably picked up the pieces. The soft ground may have also contributed to Star of Bengal slipping back through the field.

This was a much better performance than it looked though and if he reverts to handicap company here then I would be very confident of a very big run. The last time John Gosden had a runner in this handicap it was with Beachfire who had won the Wolferton on his previous start. Whilst Star of Bengal didn’t win, at least we know that this route is considered by John Gosden.

Who could be back this year for another go?

I’ve watched the race back from last year when Euchen Glen won the race making all the running. It definitely paid to be handy that day. Thundering Blue who finished 2nd coming from the back of the field demonstrated that he was arguably unlucky in this race due to how the race unfolded by winning next time out in a Group 3 and is now rated a whopping 16lb higher than when finishing 2nd in this race last year.

A horse who caught my eye in this race last year was Another Touch who was caught out wide, held up and keen for most of the race. When the race quickened from the front he then ran into trouble and was never able to get involved but was still only beaten 6 1/2 lengths by the winner. He’s now been beaten 3 lengths and 6 1/2 lengths off marks of 104 and 101 but this year could run off just 96!

8lb and 5lb lower than his last 2 efforts in this race. In 2018 he didn’t get the race run to suit and didn’t get a clear run whilst in 2017 he came from 20th and last at the 2 pole to be a never nearer 8th. A more positive (mid-division) sit this year and I would be confident of him going very close!

Star of Bengal is 14/1 and Another Touch is 33/1. Hopefully both do turn up and I would be very hopeful of 2 very big runs!